Embouchure Dystonia and Me

​My name is Robert Eshelby and I am seventy-two years old.  I live in Dorset, on the south-west coast of England.
I first played the trumpet at the age of fifteen, having played the bugle for a year previously.  I loved my first trumpet and would take every opportunity I could to practise.   I was at a boys’ boarding school, so it wasn’t easy.  Nevertheless, I practised every day and passed my Grade 5 and Grade 6 exams before leaving school at eighteen.

My family moved to Queensland, Australia, and I stopped playing my trumpet and took singing lessons as I wanted to sing opera.  (I did, professionally, for 5 years in total.)

At the age of fifty-eight, I decided it was time to play the trumpet again.  I joined a band where my fifteen-year-old step-son played, and practised every day.  It took a year or two to feel useful again, but I persevered.  I took up the soprano (Eb) cornet at about this time – a real challenge, as any mistake is usually very obvious to all, and good tuning on the high notes is essential.  My wife had by now taken up the Eb horn and we worked hard together, joining a second band for more playing time each week.

I knew that my technique had gaps and I was determined to sort out my playing.  My wife, step-son and I moved to Christchurch and Highcliffe Brass Band (http://www.candhbrass.com/), a band with a more ambitious musical director.  He encouraged me to work on some solos for Eb cornet.  These were becoming more difficult.  Also, I didn’t seem to be able to find a comfortable mouthpiece for my sop.  I started on quite small mouthpieces, Warburton 8m and 7m, which worked well for a time, but with all the practice my lips became bigger and I kept needing to change to a bigger rim.  Most experienced soprano players seemed to use quite deep cups, which I tried but couldn’t manage.

About five years ago, I was playing ‘Demelza’ in the open air at a concert when, suddenly, I couldn’t play.  I barely managed to get through the piece.  Everyone put this down to nerves, but, as an opera singer, both professional and amateur for forty-five years, I knew that I didn’t suffer from performance nerves.   After that, the situation slowly became worse.  About two years ago, I was playing Taps at a U.S. air force base nearby, and I couldn’t control my embouchure.  Similarly, I played at an Armistice Parade in Dorchester and couldn’t control my wobble.  Even playing a tuning note became a struggle; people thought that I was exaggerating my vibrato on purpose.
I persisted with my playing, until now I can hardly blow a straight note.  I can buzz without a problem, I can still sing without any problem, but as soon as I bring the mouthpiece to my lips, my embouchure seems to disintegrate and I make an unpleasant fluffy sound.

I was desperate to sort out my problem.  My step-son now plays euphonium with a Guards regiment, my wife is a regular soloist with our band on Eb horn, and I didn’t want to be her non-playing chauffeur.  None of my musical friends had ever come across my problem before and so couldn’t advise me what to do.

I knew that my jaw seemed to have developed a tremor and felt that I could possibly play better if I could control the tremor.  I found that if I held a small piece of rubber tubing between my teeth, it calmed down the tremor.  I went to my GP to ask about my problem, but he was at a loss and didn’t know who to refer me to.  I explained that the rubber tubing made a difference, but he had no diagnosis.

I decided to try to sort it out on a non-medical basis.  As the rubber tubing helped, I thought I should try gripping something else between my teeth.  The small piece of rubber was clearly a serious health risk, as I could easily inhale it when taking a deep breath!

I had an old tooth splint made for me years ago, when I had a small issue with a sharp tooth, which cut into my lip when I played.  (Eventually, the dentist just filed the tooth a little and the problem was solved.)  I thought that I might wear the splint to avoid the danger of choking - the splint fitted firmly over all my lower teeth.  Unfortunately, the splint was made of hard plastic and I couldn’t wear it and play.

This almost worked!  I could blow without any tremor, but I needed space between my front teeth to be able to play cleanly with the splints in place. Somehow I had to raise the height of the splint, which would then leave a gap between my front teeth.  I had some clear plastic tubing, which I cut into lengths the same size as the splints (i.e. 3.2 cms on the left side and 2.8 cms on the right).  I slit the tubing and superglued three layers on top of the splint to increase its height to 7mm.  When I put the splints on top of my three back, bottom teeth, the gap was wide enough for me to blow a clean note.  As if by magic, I could play again!
​I went to band practice that night and everyone was amazed at the difference.  I could play without any tremor.  I hadn’t played so well for four years!  I didn’t need to clench my teeth hard together, but closed them gently against the soft plastic and blew.  I had to file down parts of the splints which rubbed against the side of my tongue (using a dremel), otherwise there have been no problems.  I play as normal.  As soon as I take the splints from my teeth, I again have the wobble problem.  Obviously this hasn’t cured my tremor, but at least I can play my cornet again. 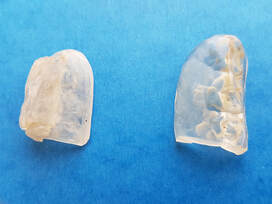 Teeth splint - cut and built-up
It seemed like a good idea to take my prototype to an expert to have it made properly, so I contacted Roy Merritt, from the Dorchester Dental Laboratory in nearby Weymouth, who agreed to make me a definitive prosthetic.  He used a soft plastic (dual laminate acrylic) mouth guard, having taken an impression of my lower teeth.  He cut out the front of the mouth guard, leaving three back teeth on each side joined by a strip of acrylic.  He then raised the profile of the mouth guard at the back by 7 mm, using a soft acrylic.  The acrylic strip between fitted under my tongue.
This system worked reasonably well, but, at my request,  he has since changed the plastic strip for a piece of fine stainless steel wire, as the plastic strip felt a bit bulky and inhibited articulation.  I can now fit my prosthesis on to my teeth before playing with no discomfort and no impediment.  Actually, I can play perfectly well with just one side between my teeth, but Roy feels that I could then develop debilitating jaw problems in future, caused by an uneven bite when playing. 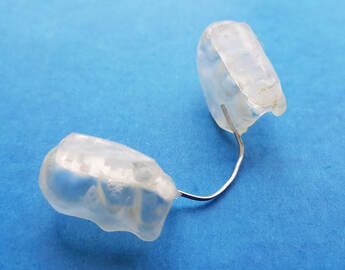 Finished ED Guard
I am not very good with computers and only found out about Embouchure Dystonia recently. I was much taken by a video online,  by Professor of Kinesiology, Dr. Peter Iltis of Gordon College, Boston (https://www.youtube.com/watch?v=2pKHuH5L9Js).  Dr. Iltis is a horn player, who has spent many years studying players with Embouchure Dystonia.  Finally I had found other players with the same problem and with some certainty, I could put a name to it. My own approach has been to ignore the medical/ physiological causes of my deterioration in playing, and to concentrate on trying to play again.  My music world had been falling apart and now I can play my cornet again.

I called my prosthesis a ‘widget’, for want of any other name.  I now refer to it as my ‘ED guard’ or Embouchure Dystonia Guard.

The sole purpose of this paper is to tell musicians interested in Embouchure Dystonia of my experience, so that others may be helped to get back their playing ability and make music once again.  If anyone is interested in contacting me, I would love to help them in any way possible.